All cooling towers need some type of make-up valve to replenish water lost to evaporation and blow down. Three basic types are available:

Mechanical valves typically come as standard from the major tower manufacturers and are the most common. They consist of a valve, float arm and float ball. The float ball

positions the arm and the arm acts on a trigger to open and close the valve. The makeup water pressure recommendation is typically 15psi minimum and 50psi maximum. Too little pressure and the valve may not keep up with the flow requirement. Too much and the valve may pin the float ball ‘down’ and force the valve open.

Electric valves are not very common. There are manufacturers such as Magnetrol that make float switches for 120v but most ‘electric’ valves are more correctly described as ‘electronic’. The reduced voltage lessens the shock hazard, should someone bump into a water level probe while inside the cooling tower. The most common electronic make-up valve is made by ‘Warrick’ and a Google search will yield more info than this short description can provide. The probe can be mounted inside the tower, surrounded by a stilling chamber to subdue the wave action of the water or, in a simple vertical pipe (typically 2″) outside the tower and equalized to the tower cold water basin at the bottom. 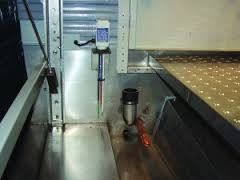 Three vertical, ¼” diameter, stainless steel probes point down into the water. The first is cut to nearly reach the basin floor, the second at the level where the make-up valve comes on and the third probe at the level where the make-up valve shuts off. Additional probes can be provided to indicate ‘high’ or ‘low’ water conditions but the three probes described form the basic probe assembly. The three probes are wired to a controller which includes a control relay that directs 120v to a solenoid valve in the make-up line. Such systems are more prone to water hammer than the other types, due to the quick acting nature of the make-up solenoid valves.

Hydraulic valves like the ‘Griswold’ have a small pilot valve with a float ball that mounts inside the tower with a stilling chamber, or outside in a stand pipe. The pilot valve connects to the body of the main make-up valve by ¼”copper or plastic tubing. The pilot directs city water pressure to the underside of a diaphragm in the main valve, opening it when the float is ‘down’ and releases the pressure when the float ball is ‘up’, causing the main valve to close. This is probably the best make-up arrangement. It is dependable and acts slowly so as to eliminate water hammer. No electrical connections are required.

[For those familiar with changing the float assembly in a toilet tank, two choices are typically available at the hardware store… The type with a ball about 4″ in diameter on a float arm and another with a smaller float that slides up and down on a pole. The first is a mechanical valve and the second is a hydraulic valve.]